The Tellington TTouch training method has wonderful applications for helping dogs with noise phobias writes Alex Wilson. It is a gentle training method, consisting of a series of circles and lifts as well as groundwork exercises to make your animal more aware, more balanced, and less stressed. Practitioner Toni Shelbourne explains more;

“Tellington TTouch (TTouch) was developed over 30 years ago by Linda Tellington Jones. The method uses non-habitual movements of the skin to improve the posture of an animal. As posture affects behaviour, the animal’s symptoms decrease as they come into balance. An animal requires physical, mental and emotional balance to be able to simply act, not react to a situation. Think of a saying you use to describe being frightened like, ‘tuck tail and run’, this beautifully describes the posture that a noise phobic animal can adopt. The posture then ‘tells’ the dog how to behave i.e. in a fearful way. Change the posture and a different message is sent, the behaviour diminishes and hopefully disappears over time. There lies the beauty of TTouch, it gets to the emotional core of the issue and helps the dog to change their perception of a fearful stimulus. As the dog can now rationally think its way through the problem, the desensitisation training, if still needed, becomes much more effective. They can now think due to not having to act in an instinctive fearful response. TTouch can be the long-term cure as well as the on the spot relief. Better still it is easy to learn and you can do it yourself in the comfort of your own home.”

Dogs have mobility in their ears which can mean that they can hold tension here. Gentle strokes of the ear to the tip can help release that tension. This may also help stop a dog going into shock in the event of an accident. When doing earwork it is important to support the head with one hand. Work on the ear the opposite side to the side you are supporting. With the thumb on the outside of the ear and the folded forefinger on the inside slide the hand from the base of the ear to the tip. Try and change the angle on each slide. You can also do circular TTouches on the ear. To make circular touches work from the base of the ear to the tip. These circles need to be light, slow and a circle and a quarter. Generally in TTouch we work clockwise, but some dogs may prefer it anti-clockwise. 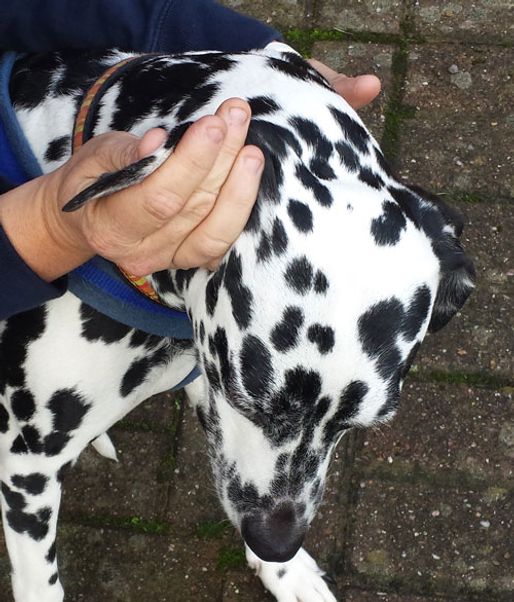 Practitioners for years have been using body wraps to help dogs, horses and even cats. Instructor Kathy Cascade explains;

“One of the most useful tools of the Tellington TTouch method is a simple ace bandage known as a “body wrap.”, see Figure 3. – For years, TTouch and TTEAM equine Practitioners have been using body wraps to influence an animal’s posture, movement, and behaviour. Sometimes the result is subtle, as when a horse picks up a foot to step into a trailer when he couldn’t do it previously, and sometimes the result is seemingly miraculous, as when a dog that is terrified of thunder storms or fireworks is able to calmly lie down and sleep through the noise. How can a simple piece of cloth have such a wide ranging influence on an animal? Part of the answer lies in how the sensory information from a wrap is processed in the animal’s nervous system.

“Typically, a body wrap is applied to an animal’s body in some sort of figure eight fashion, making contact around the chest and crossing over the back, sometimes extending to the hindquarters. “While the wrap is applied comfortably, it is never put on tightly, as the purpose is simply to bring awareness to the area of the body it contacts, rather than for any type of support. Because of the slight stretch inherent in an ace bandage, the contact provides a light sensation of pressure against the body that also moves slightly as the animal moves. This has the effect of bringing a heightened attention to or awareness of how an animal is using his body parts during movement.” 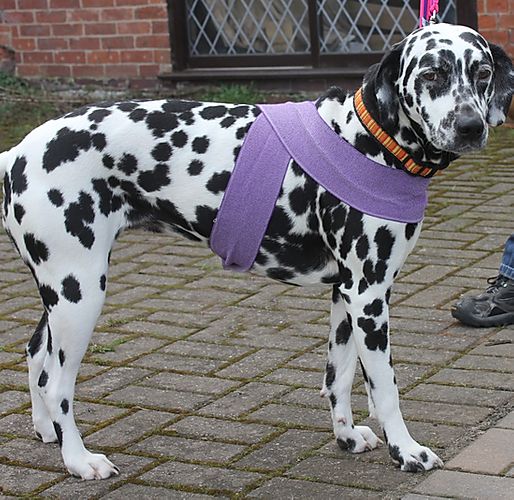 “When a dog is in a highly aroused state because of fear or frustration, his latent nervous system takes over and he just reacts to his environment. His response may be to deflect, flee, freeze or protect himself, rather than observing his environment, thinking and then offering a learned, measured response. When correctly fitted, these shirts exert an even pressure around the chest, shoulders and ribcage. Used with Tellington TTouch body and ground work, they can be particularly helpful to calm a dog so that they are able to observe and think, rather than just react. 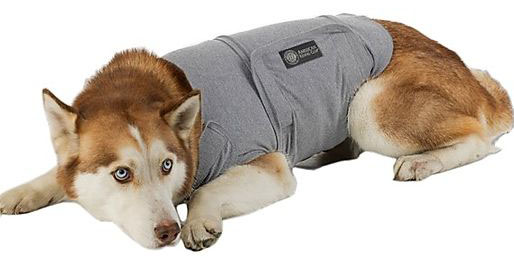 “These shirts, were designed to help dogs who suffer fear of thunder and, indeed, they help many dogs in this way. However, they can also be very useful when working through retraining programmes with dogs who are reactive or shy and those who do not travel well.”

In a stressed situation it is very important how we introduce the shirt to our dog. Tellington TTouch Instructor Kathy Casade explains more;

“The first step when introducing something new to a dog is to break it down into smaller, manageable steps. Changing the context of the new item can also be helpful. Start by placing some yummy treats on the folded shirt and allow the dog to eat from it. A dinner plate is familiar and usually not scary! Next, unfold the shirt halfway and simply lay it across the dogs back for just a few moments, offering a treat while the dog experiences this new sensation. The next step is to place it fully open on the dog’s back, closing the front connection, but leaving the side panels open. The last step is to close the panels it is snugly on the dog. At this point, it is very important to allow the dog to move around. This allows the dog to know he is not trapped, and also allows him to integrate the sensations of the shirt against his body as he moves. Remove the shirt after a few minutes. The next session may not require the step by step introduction, but keep the sessions of wearing the shirt fairly short (5 to 10 minutes) for the first few experiences.”

With any new experience for a dog or when using a new piece of equipment like a wrap or a calming coats it is important to have realistic expectations. Some dogs will show huge change immediately, but with others that change may be subtle: look for changes like the position of an ear, softening of the eyes, carriage of the tail, a change to the gait, perhaps they are licking their lips less, they have stopped yawning. As you continue to work with the dog these changes may become much more noticeable, like dogs very fearful of thunder or fireworks, coping better, a dog with manic behaviours being much calmer, a dog that is a huge puller, pulling less and so on.